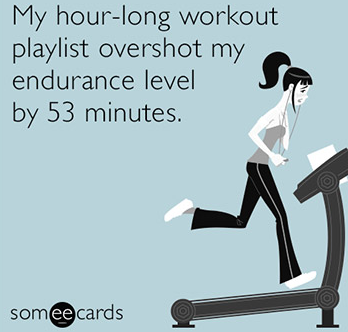 Still raining in good old Louisiana, on the bright side, the temperature is pleasant (even if it is ridiculously muggy for these temps).  In Brisbane, Australia, we would have the same daytime temperature but it would be dry at this time of the year.  It was a good day to head up to the gym again.  Which I did, in the rain.

I jumped on the treadmill enjoying the fact that I can put the TV on whatever channel I want.  I don’t change it – just like when I craft, the TV is purely there for background noise.  If I listened to it, I would not be able to concentrate on my fitness goals.  Today I was going to do 3 miles of walking/jogging and then some weights.  Turns out when you are on a treadmill and the power goes out – you get a bit of a shock to the system.  Not literally, but it was a shock to be walking along at a good pace and then suddenly you are moving but the conveyor belt is not.  Fortunately, the blackout only lasted a few seconds.  However, I decided to revise my goals and instead of plugging out 3 miles, I would do one 20 min session on the treadmill (plus the time I had done before the blackout – which I have no idea how long it was as I was daydreaming at the time).  Then I would do some arm weights including the dreaded flappers  (I have no idea what they are called – I call them flappers and I hate them with a passion because they hurt!)

I did HIITs where I jogged at over 4.5 miles per hour (this is 7.2 km/hr for us metric people).  I think I did 5 of these in total and boy was I sweating at the other end of it, and huffing and puffing.  I did try to go faster at one stage but my knee did not like it so I slowed down.  I am pretty impressed with that pace.  I haven’t been that fast for a while.  My back felt good after the first run and over the 20 minutes plus warm down I did over 2 miles.

Then I did flappers – Yuk!.  I only used the lightest weights because I had no idea what 5 pounds is in kilograms and I was too tired to work it out.  They are not that heavy because I managed 3 sets of 8 flappers.  A flapper is simply when you hold a dumbbell in each arm and raise your arms out beside you.  Your arms should stay straight.  I also did bicep curls, bicep raises and tricep dips before calling it a day – I was about 15 minutes short of my time goal but I had plenty of things to do so I didn’t want to be too exhausted at the end of it all.

Category: The new Fit me!Tags: blackout on treadmill, flappers, health and fitness, the new fit me